a portrait gallery of pioneer plants in cyanotype photograms.

maybe here are the origins of townspeople’s horror of weeds: as soon as they turn their backs on their city, pioneers strike root, followed by bushes and small trees, and finally dense forest. like tikal, angkor, glanzenberg, pripyat … the city disappears, becomes legend, is forgotten – and sometimes rediscovered.

the project unkraut (german for weeds) imagines such a tale.

we began with several botanical surveys on an abandonned football stadium in zurich (stadionbrache hardturm), collecting samples of pioneer plants and compiling a list of species.

from selected specimens we made cyanotype photograms and installed them on one of the remaining walls of the football stadium. besides this ephemeral outdoor exhibition we produced a small edition of herbaria and individual prints. 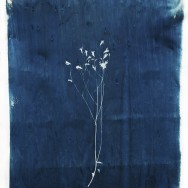 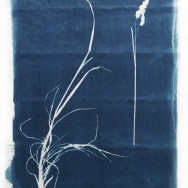 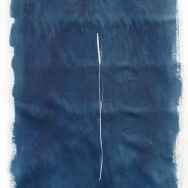 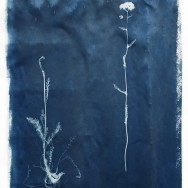 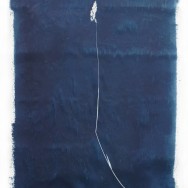 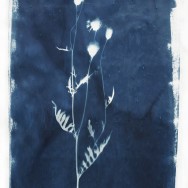 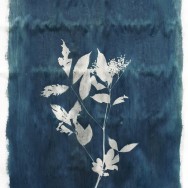 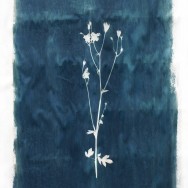 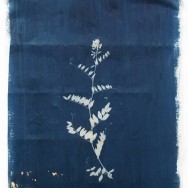 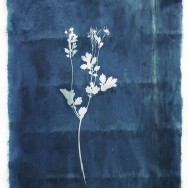 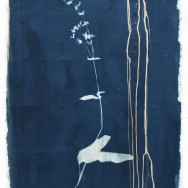 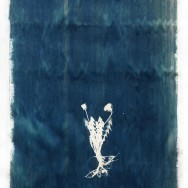 formally and technically unkraut is inspired by the work of anna atkins. her experiments with letting plants draw their own scientific illustration using light and chemistry were published in british algae (1843), considered as one of the first photographically illustrated books. atkins’ herbaria are compilations of cyanotypes, an early photographic process that gives blue-white prints.

in addition to the herbaria, weed safaris were offered, guided tours through communities of plants and a prospect of the city disappearing under grass and trees. the safaris aimed at understanding the life of pioneer species, their diverse origins, the challenges they have to overcome and gave an outlook on the gradual changes plant life on the site would undergo if left undisturbed.

unkraut is a contribution to the project living room, curated by café des visions.

over your cities grass will grow is the title of a documentary on the work of anselm kiefer in barjac (france), labelled steampunk san gimignano or post-apocalyptic theme park by some critics.

others have told similar stories before us: in franz hohler’s writings it is once animals that lead a reconquest of zurich. (a pack of wolves, a now common sight, hunts down its first stag on the lawn of the hardturm arena.) later, in ‚a new mountain‘, a volcano takes the city by surprise with an ‚inconvenient apocalypse‘. taking a reportage approach, gerhard meister and robert polidori report back from a trip to zurich, travelling on a potholed motorway lined with car carcasses (and probably passing next to the hardturm stadium), to an interview with a warlord who reigns over eastern parts of one-time switzerland, some twenty years after a nuclear meltdown.

in 1939 general henri guisan declared zurich ‚obstacle absolu‘, dreaming of impregnable „ruins all along the shores (of the limmat)“. further to the north, around the same time, cities were designed to look good even after the collapse of empires. systematic studies of nature reconquering such wreckage began to be undertaken in the subsequent decades (with some plants given nicknames such as bombweed).

for an adventure of rediscovering a city in the jungle: the lure of the lost city (national geographic magazine, october 2015).

the image gallery above shows photographs of the open-air installation (dimensions: 2 x 8 m). some of the prints begin to show effects of alcaline seepage from the concrete wall they are pasted on.

the project is guest in the journal lo squaderno (no 38 on imbalances and fragilities, december 2015).

thanks to markus urbscheit, markus k. meier and simon spycher.