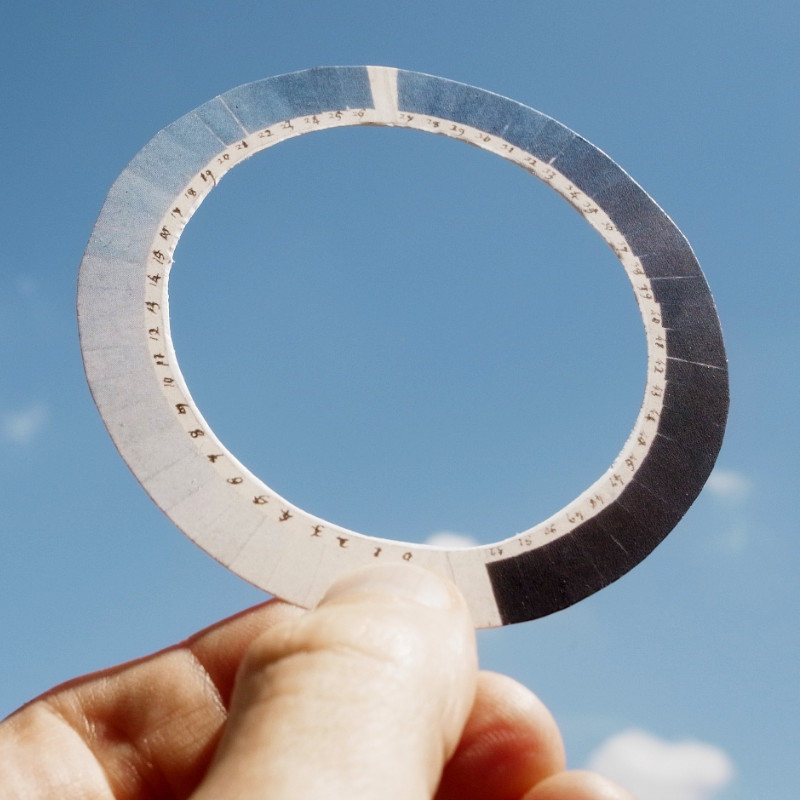 the blueness of the sky over zurich: details of the experiment

the following notes are based on the around 150 data sets supplied by participants of the experiment and their comments (thanks). 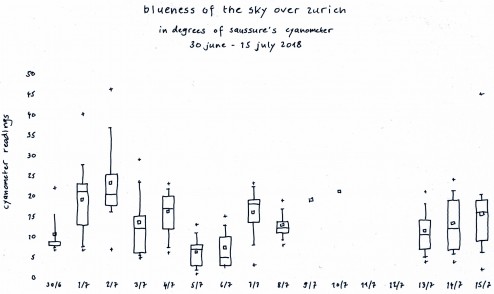 blueness of the sky over zurich in degrees of saussure’s cyanometer, 30 june – 15 july 2018. klick on the drawing for a larger image.

the box plots in the figure above show for each day the median and average blueness (line cutting the box in half and small square, respectively). the box includes 50% of the data (lower quartile to upper quartile) while the whiskers indicate the 10th and 90th percentiles. small crosses give the minimum and maximum values, respectively.

on sunny days mean blueness is in the range of 15-20, on cloudy days (5 and 6 july) between 5 and 10. this is about in agreement with the 1790 values observed by saussure in geneva and (or) might suggest that the postcard cyanometer is a sufficiently approximate reproduction of the original.

daily averages correlate with hours of sunshine and (negatively) with cloudiness as reported by meteoswiss. this appears plausible. the correlations are not statistically significant, however.

even on days with fairly constant weather, variances in the reported blueness are considerable. this may be explained by a variety of problems related to the instrument and its use. some are illustrated, without going into methodological detail, by the following (synthetic) quotes:

„i am trying to take measurements while still in bed. doesn’t work! it is too bright outside.“
measurements require that a certain amount of light falls onto the cyanometer. moreover, comparing the colour of light (ie of the sky) with the colour of a solid body (reflected light) is not straightforward. most measurements for the experiment discussed here were made around sunset, when visitor numbers were highest. in low light, reading the cyanometer becomes difficult which may explain the high variances in the data. between 8 am and 6 pm the variances are lower.

„where i am supposed to measure? next to the sun the blue is different than just above the horizon; to the north it’s not the same blue as in the west.“ „i am standing in my mother’s garden with your cyanometer and despair. the sky is bluish in some spots, grayish in others and there are even completely white areas.“
even if the sky is blue and there are no clouds, its colour is usually not uniform. solutions to this: always note the most intense blue? make measurements in a consistent angle to the sun and the horizon?

„now the sky turns red. how do i measure this?“
the sky may take colours (hues) that are outside the scale on the cyanometer. saussure’s instrument uses prussian blue. depending on preparation and concentration the perceived colour of this pigment corresponds to a monochromatic lightsource of about 470-480 nm, the colour of the sky to circa 460-480 nm (eg smith 2004; estimates vary between sources). modified instruments have been proposed that also include red hues, for example. see also the footnotes at the bottom of the project page for studies of the colour of sunsets. 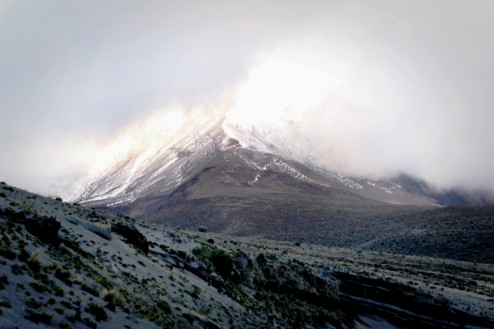